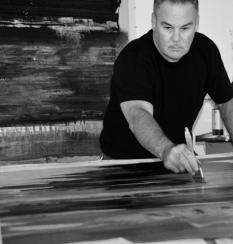 Smith Carney was born in Albuquerque, New Mexico and spent his childhood surrounded by the colorful landscape of northern New Mexico. A fascination with the beauty in the variety of nature kindled Carney’s desire to create at an early age.

He later moved to Texas and attended the University of North Texas where he received a Bachelor of Fine Arts degree in Advertising Art. In Texas, he began his career as an Art Director for a major corporation, working there for seven years before moving to Arizona to pursue his passion for Fine Art. Arizona is where Carney built and refined his techniques while working for a large Fine Art/Design company in Phoenix, Arizona.

The key qualities of the art of Smith Carney are a palpable creativity and austere evolution while constantly moving forward to create something new. It is this methodology of creating discarding and reinventing that creates something new and distinctive. These elements of erosion and change are always resident in Carney’s work. The subtle nuances of serendipity, poised tone and composed surface quality make for the overall impact and distinctive style as Smith Carney continues to reinvent his artwork.