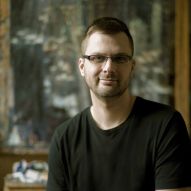 Derek Penix was born on December 29, 1980 in Tulsa, Oklahoma. Penix grew up watching members of his family paint but didn't pursue painting himself until after high school. After trying his hand at painting and selling his first piece he knew this was what he wanted to do for the rest of his life.

Over the years Penix's work has changed greatly and continues to evolve with each painting. "I never want to be stuck painting only one way or only one subject matter. Variety is the spice of life and is especially that way for me with painting."

Penix has had the opportunity to work under Quang Ho and later with C.W. Mundy. "They have helped me as an artist immensely. I am so thankful that they have been willing to feed into my life as they have."

Penix has been recognized in many national competitions and publications. Even at a young age Penix was recognized in South West Art Magazine's “21 Under 31” artist competition in 2010, and Oklahoma Magazine's "40 Under 40" in 2014. To date, Penix's most notable and recent award has been the 2016 "Gold Metal Award" from Oil Painter's of America's 25th National Juried Exhibition, boasting a $30,000 prize. Penix currently lives in Tulsa, Oklahoma.